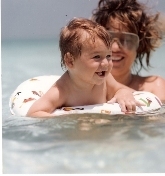 While sports have always been a part of my life, it's thanks to my father, Christos, that I'm a tennis player because my mother, Andoula, didn't want that.

I began playing tennis at age five with my father and brothers. My father is originally from Lebanon and now owns a clothing store in Cyprus. My little sister, Zena, was adopted when she was just six month old. My older brothers played Davis Cup. Petros is now a federal coach and Marinos has graduate as Petrolioum engineer from Texas Tech University and now he is residing and working in Texas USA.

When I was 11 years old, I felt that tennis was much more than just a passion for me. 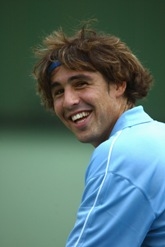 At the age of thirteen and fourteen, I was the number one senior player in my country and quickly we (my parents and I) realised that it was time to leave Cyprus if I wanted more challenging competition.

It was during the "Petits As" tournament in Tarbes (France) January 1999 that the agent of Patrick Mouratoglou academy the director of the first high level tennis academy in Europe first realised my potential in the game. In September same year and during the under fourteen Europe master Tournament he approached me and advised to contact my father. After a number of conversations with Patrick and a first visit to the center in the Paris suburb of Montreuil, I signed a contract with the Academy.

It was a new life for me, far from my parents and friends. I settled in quickly with my host family, the "Benhaims", who were very important to me. It was a long and hard adjustment and it was 2003 before I had my first really positive results.

The year ended in a blaze of glory with the title of Junior World Champion. It was without a doubt the most important title of my tennis career. It gave me confidence and reassured me that I'd made the right choice by leaving everything behind (friends and family) to live my dream. 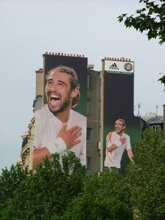 I turned professional in 2003 and in my first full year on tour I won four Futures titles, including one in Nicosia, Cyprus. The following year I stepped up to Challenger events and won my first title in Bolton, Great Britain, before collecting a second in Bratislava.

I made my breakthrough season in 2005 by recording my first victory over a Top 10 player (No. 10 Mariano Puerta) to reach the quarterfinals at the ATP event in Tokyo, before then reaching my first ATP final in Basel. I defeated No. 10 David Nalbandian in the semifinals before losing to Fernando Gonzalez in the final. I finished that season ranked No. 56 and became the first Cypriot to rank inside the Top 100 of the ATP Rankings - a proud moment for me.

I had an unbelievable start to the 2006 season, defeating three Top 10 players - No. 3 Andy Roddick, No. 8 Ivan Ljubicic and No. 4 David Nalbandian - to reach the Australian Open final! I won the first set against World No. 1 Roger Federer in the final, watched by loads of really loud Melbourne-based Greek supporters - but ultimately lost out in four sets. It was a massive moment for me in my career and for all my family and friends in Cyprus. After that great run I rose to No. 27 in the rankings.

Later that year my Grand Slam success continued with a semifinal run at Wimbledon. After defeating former champion Lleyton Hewitt in the quarterfinals I lost to Rafael Nadal - he's not a bad player - in the semifinals. It was a great tournament for me and I broke into the elite Top 10 afterwards, reaching a career-high ranking of No. 8 on August 21- very exciting! 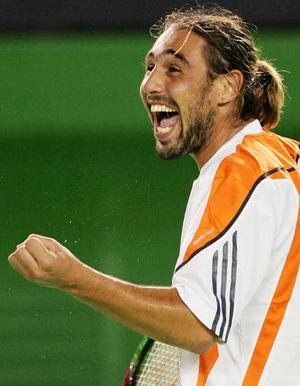 My season successes weren't complete yet though. In September I capped a wonderful year by winning my first ATP title at the China Open in Beijing with a very comfortable victory over Mario Ancic in the final. It was a dream for me. As a result of my many accomplishments I received the honor of being named the 2006 Cyprus Male Athlete of the Year.

At the end of that year I published a book about my life as my way of thanking the people I love and to talk a little about my life for those who are interested in my career.

I had another good start in the 2007 season, reaching two quarterfinals before winning my second ATP title at Zagreb with victory over Ivan Ljubicic. I very nearly won my third title a week later at the Open 13 in Marseille, but lost in the final to Gilles Simon. I had another strong grass court spell, reaching the final in Halle, where I lost to Tomas Berdych, before losing a marathon five-set Wimbledon quarterfinal against Novak Djokovic. The season finished well for me, with semifinal appearances in Basel and at the BNP Paribas Masters.

2010 was another special season for me, on both a personal and professional level. The happiest day of my life came in July when I married my love Karolina. Professionally, I finished in the Top 20 once again and reaching my second Masters 1000 semifinal at the tournament in Cincinnati. I also won my fourth ATP World Tour title in Sydney and reached two more finals in Moscow and Washington. My proudest moment came in Indian Wells earlier in the year, when I saved three match points to beat Roger Federer for the first time. Then, in Cincinnati, I defeated another World No. 1 in Rafael Nadal. Beating two No. 1's in one year was a great achievement.

There are moments that make you proud to be a Cypriot and being selected to carry the flag at the 2012 Summer Olympics in London was definitely one of them. To play in the Olympics at Wimbledon was very special too. 2012 was also an important year for me because I won my first ATP World Tour doubles title in Zagreb, with my friend Mikhail Youzhny. As the season came to a close, the joy in my life was just beginning as Karolina and I welcomed a baby girl Zahara in October. In 2015, we welcomed a second daughter, India.

I have struggled with some injuries in recent years, but that has not stopped me from fighting to achieve my dreams: rising to the Top 10 and winning titles again. I won four Challenger Tour trophies in 2014 and returned to an ATP World Tour semifinal in Zagreb in 2015, so I am very confident that I can play at a high level.

As a whole, I performed well in 2015, finishing the year in the Top 50 at No. 46. The shining moment of the season came in reaching my eighth ATP level final in Atlanta. I lost to John Isner, but I take much pride from that result and feel it has given me great confidence going forward. I also reached the semifinals in Nottingham and Stockholm and did well in Grand Slams at the Australian Open and Wimbledon. I turned 30 this year and I hope it is a new beginning for me to continue rising.

I am very proud of my 2016 season, playing the entire year on the ATP World Tour. I reached my 13th tour-level final and second at the 500 level with a great week in Dubai in February. While I did lose to Stan Wawrinka, I gained a lot of confidence that evenutally pushed me back to the Top 35 of the Emirates ATP Rankings. Also advanced to my first clay-court quarterfinal in four years, in Houston, and battled to the semis on the grass of Newport in July. I also earned a Top 10 win for the second straight year, defeating World No. 8 Tomas Berdych in straight sets in Halle. Finally, my biggest result came at the US Open, where I reached the Round of 16 at a Grand Slam for the first time since 2009. I will never forget that week in New York. While I was unfortunately unable to play at the Rio Olympics due to injury, my summer couldn't have ended better.

I still want to give and take pleasure from being on the court - this is my aim.